A few Christmases ago my sister requested 5 large beads with swirls of colours, so I made her some jumbo lentil beads. Unfortunately they have been bothering me ever since! 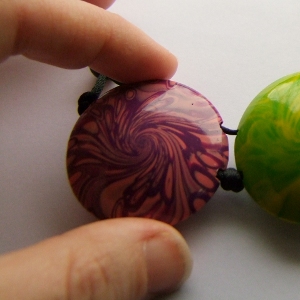 I decided to bake them without holes so as not to distort the shape, but the first problem was that the beads were over 3cm in diameter, (almost exactly the same size as my drill bit) so I needed to find a way to drill from either side and meet perfectly in the middle. I found an excellent tutorial for drilling lentil beads but unfortunately I had to wait until we arrived at my dad’s house to use his drill press. Did I mention this was Christmas eve?

After some trauma (including a cracked bead) we managed to drill all the beads perfectly in the center. As soon as the varnish was dry, I strung them only to be met with the next problem: while I loved each of the beads individually, together they just didn’t hang nicely at all! Since it was now late on Christmas eve it was too late to do anything. 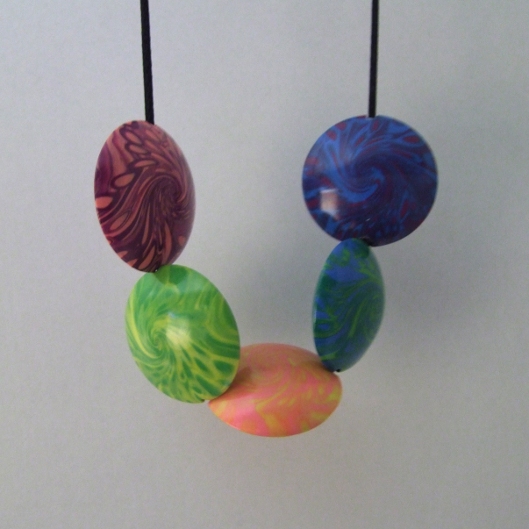 My first attempt at a solution was to make some black spacer beads. They solved the problem of the beads being too close together, but the lentils still had a tendency to twist sideways. Also the holes of the spacer beads were quite large so they didn’t sit neatly on the cord. So slightly better but still not great. 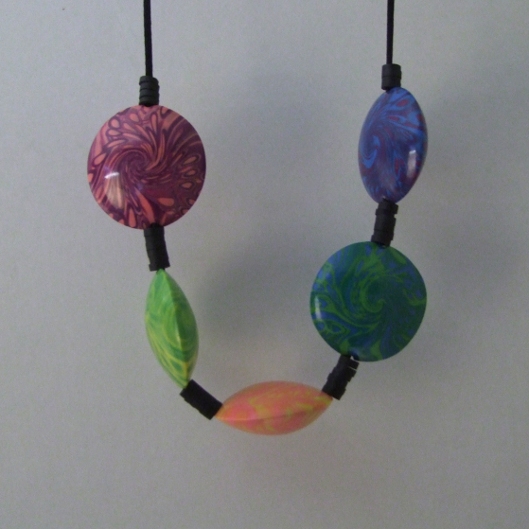 I have FINALLY managed to get the beads back from my sister and drill a second hole between the first hole and the top of the bead. I have tied knots between the lentils to keep them spaced apart, and strung a second (slightly thinner) cord which stops them twisting. Because the necklace has an adjustable knot, I have put in two “tension” beads – these allow the second cord to be altered so that it hangs correctly (changing the length of the necklace seems to change the angle of the loop sides). 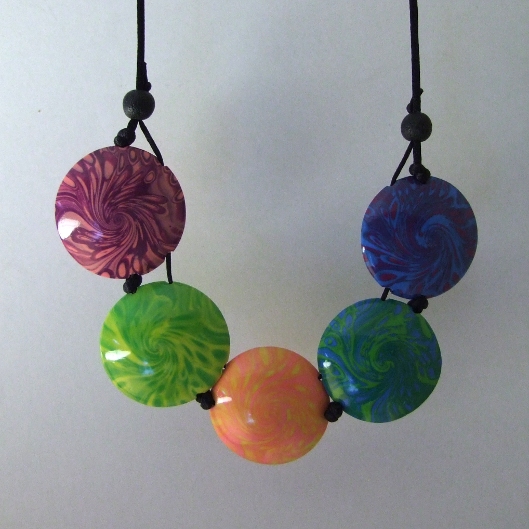 Voilà – new improved necklace. The lentils no longer twist, and the second cord is not too intrusive. If I make large lentil beads like this again, I will drill them slightly above center – presumably the weight at the bottom will discourage them from twisting.

If you want to try making lentil beads yourself, this is a really good tutorial.

5 thoughts on “Hanging with lentils”

This site uses Akismet to reduce spam. Learn how your comment data is processed.