Here are a couple of bracelets that I made using my polymer clay beads. Since I actually made them last week I’ll put them down for week 33 of 2016 Polymer Clay Challenge, even though this blog entry is a bit late for that. 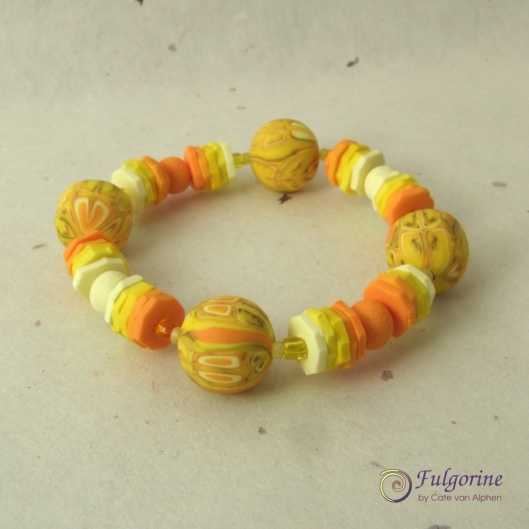 I used the colours from my Yellow Palette.

Today is the last day of Yellow. I’ve been a bit more organised this time and I have listed most of the components in my bead shop.

I’ve kept a few components aside because I know how I want to string them to make a necklace. No doubt they will make it to my Etsy shop with finished pieces of jewellery like my Daffodil necklace eventually.

This week I’m slightly early for my Polymer Clay Challenge piece because it’s nearly time to start the next colour – green. I made toggles this week. I kept it fairly simple because I knew I didn’t have much time to work on it. I wanted to make something to go with my retro beads. 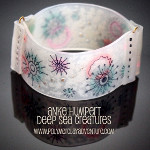 I used the cut and replace technique from Anke Humpert’s class on the Virtual Retreat. It’s the same on both sides, but I think it would be interesting to try contrasting colours on the reverse. 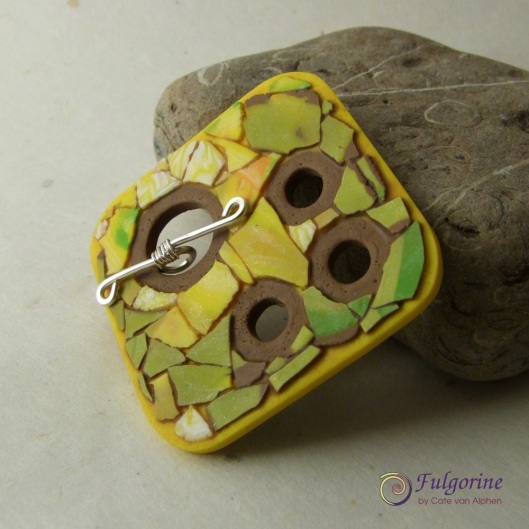 The mosaic focal toggle happened by accident because my on my first attempt the clay was a bit thin. Adding shards of polymer clay helped add some thickness and I like the look of it too 🙂

Now you can find it in my Etsy shop.

This week I made yellow polymer clay beads again. I started off with some macaroni beads with random patches of colour made from leftover mokume gane sheet rolled to the thinnest setting and torn into small pieces. The result reminded me of painting watercolours onto wet paper. 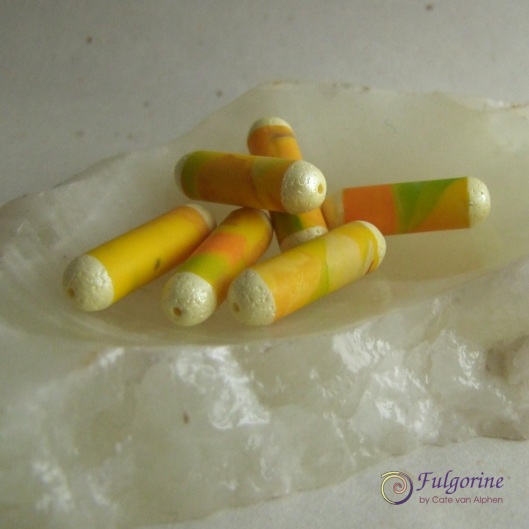 I also made a curved piece that I was going to cut up into smaller beads, but I like it too much as a whole. I think I’ll make it into a torque necklace once I’ve done a bit more sanding and tidied up the ends.

Then because it was the Easter weekend, I decided I had some time to revisit the retro beads I made earlier in the year. I thought perhaps if I made several all together it would be quicker and more efficient. It wasn’t really 😐

Almost as soon as I’d made them I wanted to switch some of the colours around. I have an idea about what’s worrying me with these beads and I’ll get back to you as soon as I’ve figured out how to articulate it.

This week I made yellow polymer clay focals. I started off making a domed slider pendant that could also be used as a cabochon in a bead embroidery project. 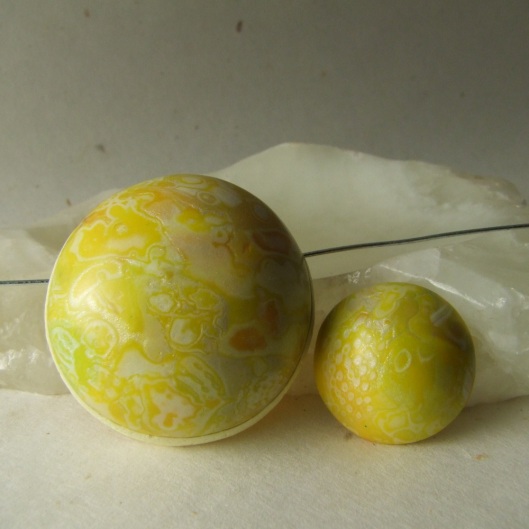 I made a shank button to go with it too. (The wire in the pictures is there to show the position of the hole in the slider pendant.)

Then I remembered I had timed yellow to this time of year so that I could make daffodils :). I decided to sculpt little daffodils, and to protect the tiny petals while the pendant is worn, I reused the mokume gane dome idea and cut a window to show the flowers inside.

Since I had matching beads from an earlier week, and a shank button to use as a closure (made using the clay from the hole of the dome), I couldn’t resist making a necklace.

The back of the pendant also has a mokume gane pattern.

Back of Daffodill necklace by Cate van Alphen

But that’s not all! I also made a tassel pendant using a cylinder bead and some of my rustic sequin beads together with silk yarn, satin ribbon and coloured copper wire. 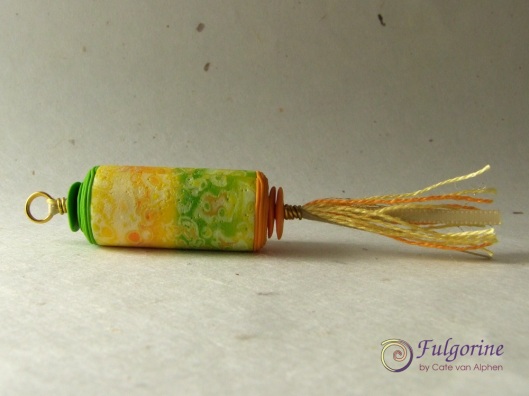 The last pendant is a work in progress. I still need to clean off the sanding dust and finish the edging. But I thought it was interesting to show the progression of the dome idea.

This week I made yellow beads for the 2015 Polymer Clay Challenge. I made some more of my patchwork beads.

I’m so excited, I had an actual sunbeam this morning for taking photographs! I started this week off by making some buttons. They may look familiar from a couple of weeks ago when they were cabochons.

But now they’ve got their shanks on baby 😉

Next I made some bar buckles using the mokume gane sheet from last week. I also made a new sheet of mokume gane for the oval buckle using the offcuts which were still on my board. 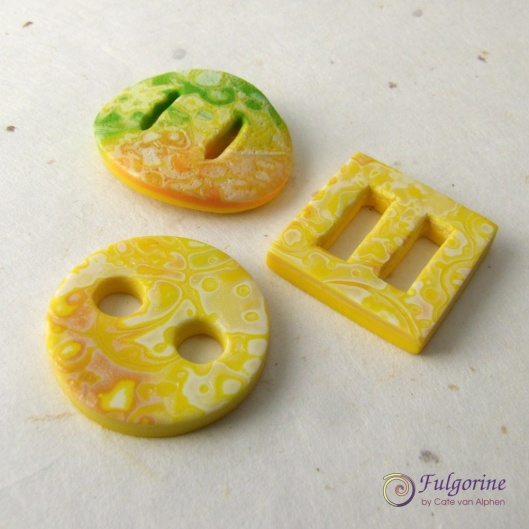 I whipped up a bracelet using some old green ribbon and some of last week’s beads to test that the buckle actually worked.

Polymer clay and ribbon bracelet by Cate an Alphen

It worked well until I took my jumper off and the whole bracelet came off too. The buckles hold quite well while the ribbon is horizontal, but when the buckles are lifted up they lose all tension and the ribbon just slips through. Maybe they would be better able to grip thicker (or rougher) fabric? 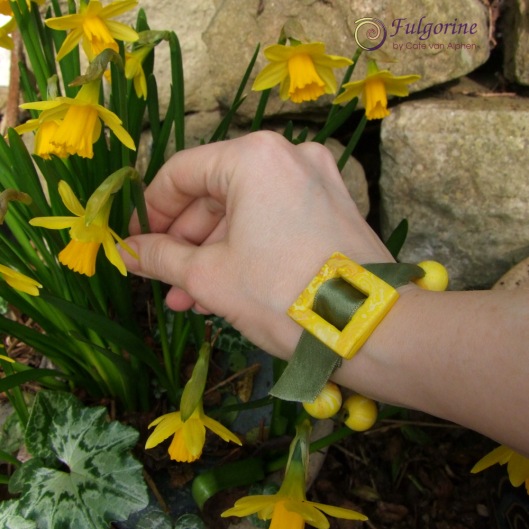 Perhaps the buckles should only used decoratively, or just to adjust the length rather than as a closure. I think they make interesting focals and I like the big hole button look of the round one. I’m sure they’d look great with sari silk, but I haven’t got any to test with. Or a band of macrame, but that will have to wait.

This is my first week making yellow components for my 2015 Polymer clay challenge. To explain how I got where I got, we need to go back to orange, and then even further back to when I was in primary school.

For some of my primary schooling I went to a Waldorf school. This meant that all my books were little works of art. So for maths, instead of drawing a line between a day’s sums we drew a little pattern. The paper was grid lined so I invariably ended up with zigzags of increasing complexity. Sometimes there was more pattern than sums. So when I came to tidy away my orange canes, I saw a load of triangles. Lots of triangles = zigzag!

The first sheet I made was slightly clunky and approaching visual indigestion. I realised I needed areas of plain colour to break up the busy canes. 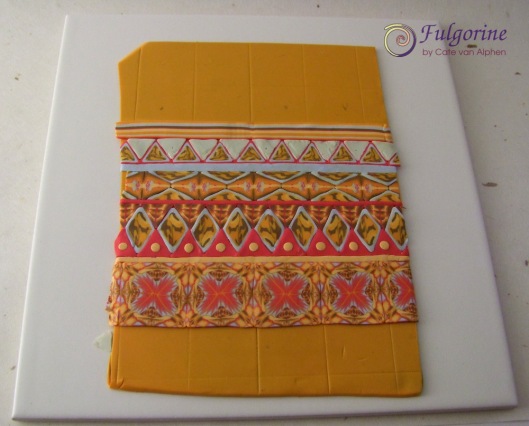 Then, all too soon, it was time to switch to yellow. Since I’d spent so much time fiddling with the orange pattern sheets, I knew there wouldn’t be enough time to make yellow canes AND another zigzag sheet. So I made a mokume gane pendant that was a little underwhelming because it didn’t have the contrast (and I was worried other colours would swamp the yellow).

Along came Suzanne Ivester’s “Painting with Polymer” class on the Virtual Retreat and I realised I could use sheets of marbled clay like inlay. 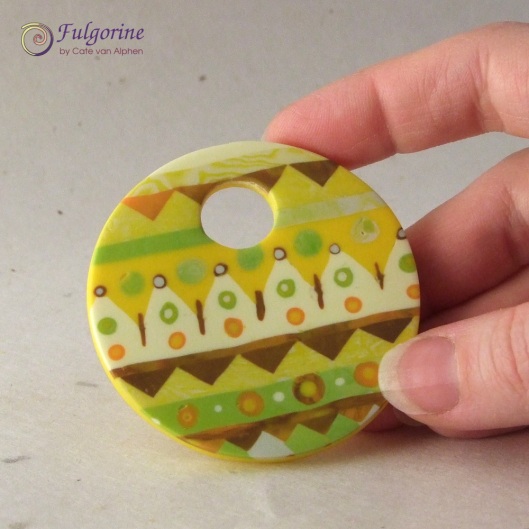 I also made a matching pair of focals, which I’ll probably use for earrings.

I also made some cabochons that will probably become shank buttons.

And I put some of the pattern off-cuts into a ready-made metal bezel. 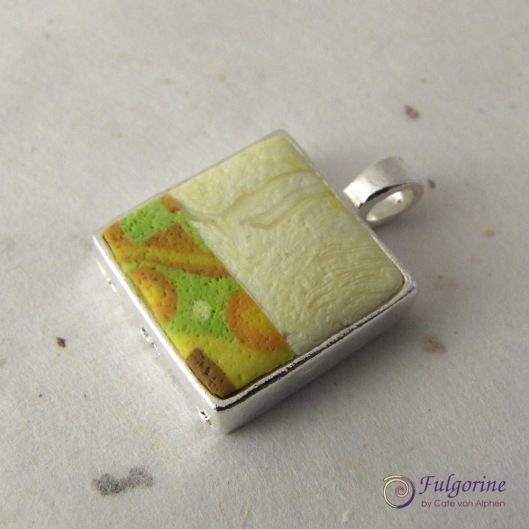 It has been really strange working with a new palette of colours especially when I was part way through another project and some of the colours are the same. I think the biggest challenge with yellow will be not overwhelming it with its companions.

Here are my colour recipes for the yellow colour palette of my Spectrum Challenge. I have used Fimo Professional polymer clay. 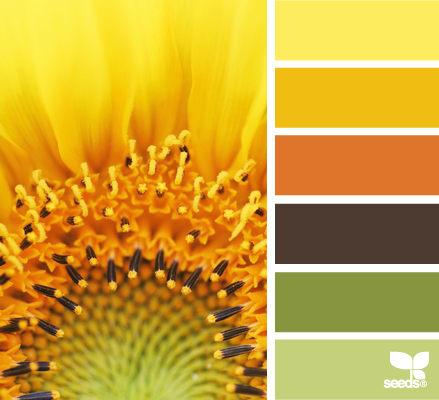 Now I’m off to mix colours 😉

Back in May I decided to make a necklace using a pendant I had made with a yellow flower. At the time I had hardly any yellow beads so I specially ordered a sunshine mix of yellows and oranges. I ended up with a lot of leftover beads, so I decided to bead a necklace for my Fire Moon pendant.

My first attempt was a multi-strand necklace with a beaded toggle. There was nothing wrong with the necklace, but it just didn’t suit the pendant.

So I tried again including burgundy ribbon and silk yarn and I was happier with the result. 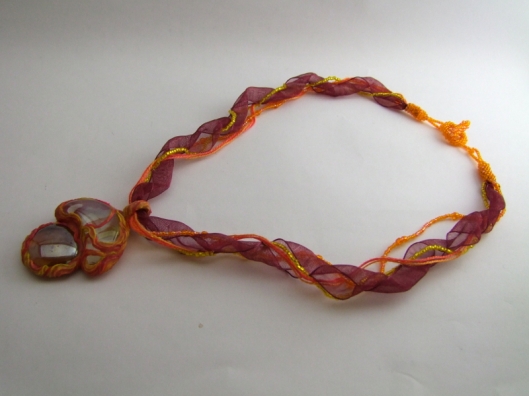 I still had the first attempt necklace which now demanded a pendant, so I made a sheet of mokume gane to match the colours of the beads. I made several pendants (some still unfinished) until I settled on a large barrel bead pendant.

What I find interesting is that now that it’s October those sunshiny Summer yellows look like fiery Autumn foliage. It just shows what a different perspective can do. Lately my glass has been half empty – I’m trying to see it full again.

If you would like to sponsor me on a monthly basis please have a look at my Patreon page. I offer rewards specifically for my patrons and you can cancel any time.